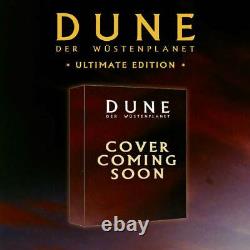 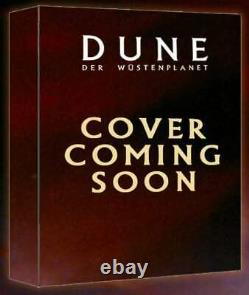 Blu-Buddy - Your buddy for exclusive steelbooks! What´s inside the Ultimate Edition? Photobook with Blueprints and Setpictures from Ron Miller and an interview with him.

Booklet with Essay from Paul Poet. DUNE The Comicadaption from Bill Sienkiewicz and Ralph Macchio. New 4K Sample of the Original Negative from Koch Films. New Documentation in Movielenght: The Sleeper Must Awaken Making of DUNE with many new interviews. New Interview with Actor Jürgen Prochnow.

Featurette Beyond our Imagination from and with Brian Sillman (Netflixs THE TOYS THAT MADE US). Featurette Prophecy Fulfilled with new Interviews from Steve Lukather and Steve Porcaro as well as Tim Greiving. Interview with Specialeffect Artist Giannetto De Rossi. Impressions of DUNE Making of-Documentation from 2003. Cut Scenes, partially with commenatry from Raffaela De Laurentiis. Featurette DUNE Models and Minatures. Sean Youngs Super8-Images from Set.

English 5.1 DTS-HD Master, German. 1x 4K UltraHD, 4x Blu-ray Disc, 1x Blu-ray Bonus Disc, 1x Audio Disc. [4K] UHD Blu-ray discs are not region-coded, so the disc will play on UHD players worldwide [Blu-ray] B Locked (The disc will only play on Region B or multifree Players). In the distant year of 10191, all the planets of the known Universe are under the control of Padishah Emperor Shaddam IV and the most important commodity in the Universe is a substance called the spice "MELANGE" which is said to have the power of extending life, expanding the consciousness and even to "fold space" ; being able to travel to any distance without physically moving.

This spice "MELANGE" is said to only be produced in the desert planet of Arrakis, where the FREMEN people have the prophecy of a man who will lead them to true freedom. This "desert planet"of Arrakis is also known as DUNE. A secret report of the space "GUILD" talks about some circumstances and plans that could jeopardize the production of "SPICE" with four planets involved: ARRAKIS, CALADAN, GIEDI PRIME and KAITAIN, a world at least visually very alike to Earth and house of the Emperor of the known Universe.

The "GUILD" sends a third stage navigator to KAITAIN to ask details from the Emperor and to demand him.. These are regular and official releases in Europe. Once you actually start playing the main feature, you will notice no difference from an American release. The audio is exactly the same as it is for the American release, so don't worry there are no voice actors dubbing over American speakers! Then what is the difference to an U.

The primary difference is in the factory packaging which will be in foreign language. The steelbooks themselves will be written in english and will always look like pictured. Mediabooks will mostly have foreign language printed on them. What about a Digital Code?

Please note that if the item includes any sort of redeemable code, whether it's a digital download, rewards, or bonus code, it will not be redeemable by US Residents! The item "Dune (4K UHD + Blu-ray) Ultimate Edition Brand New Pre-Order" is in sale since Sunday, June 20, 2021. This item is in the category "Movies & TV\DVDs & Blu-ray Discs".blubuddy" and is located in Köln.